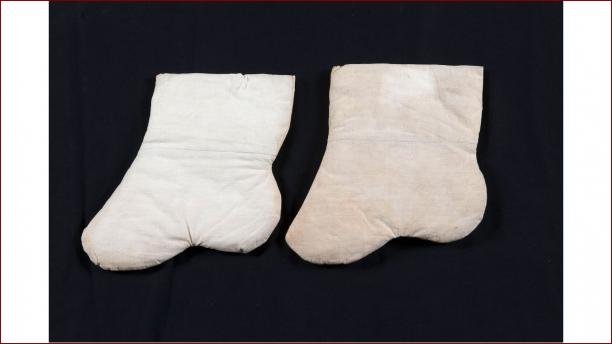 Gewatteerde sokken die 's winters zowel door mannen als vrouwen worden gedragen. No traditional Korean costume would be complete without pŏsŏn, white boot socks padded with cotton for warmth and comfort. Pŏsŏn are important part of everyday life. People add to the beauty of the hanbok, Korean traditional costume, and the quality of their stitching reflects on the class background of their wearer. All the lines of the poson sweep together to meet in a hooked peak at the toe. No part of the pŏsŏn resembles its corresponding part on the foot closely. Since it fits snug, the pŏsŏn does not come off easily once it is on. When taken off, it retains its attractive form. In fact, though originally for the foot, it can also serve as a decorative piece for a room. The paper pattern used to make a well-fitting pŏsŏn was an essential feature of every woman's trousseau in traditional society. In fact, the well-bred woman's trousseau included a special cloth back to hold her poson pattern, and careful attention was taken to make the pattern itself as pretty as possible. Pŏsŏn are made of four layers of white cotton fabric between which thin layers of cotton wadding are quilted. Each time the pŏsŏn are washed, the wadding must be removed and requilted. The sewing and washing of pŏsŏn were perpetual tasks for all Korean women just a generation ago. With the growing popularity of western style clothing over the last several decades, pŏsŏn have fallen out of favour. Shops specializing in pŏsŏn making all closed by the end of the 1980's. Pŏsŏn-making has become a minor cottage industry, and the old pŏsŏn shops are a thing of the past.