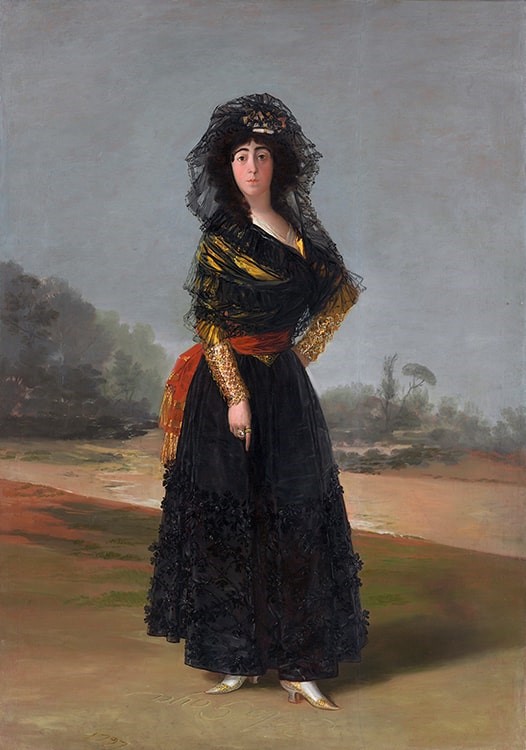 For my first blog for Modemuze I chose a topic close to home: the Spanish mantilla.

For those not familiar with this particular clothing item, the Royal Academy of the Spanish Language (RAE) defines it as “a garment of silk, blonde, wool or other fabric, sometimes adorned with tulle or lace, worn by women to cover their heads and shoulders at parties or solemn events”. As a picture is worth a thousand words, let us first have a look at an outstanding example of the mantilla: 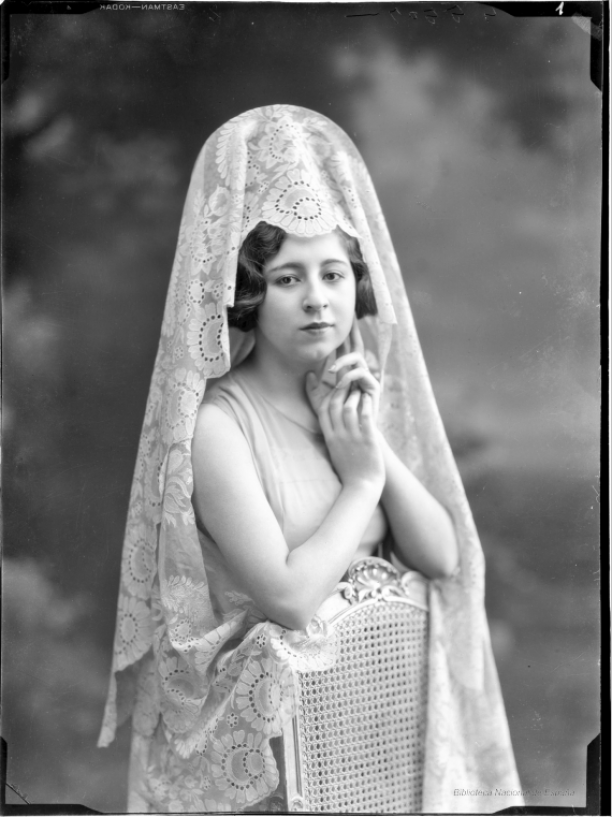 Contrary to what the lightness and aesthetic appeal of this headpiece may suggest, a web of political, identity and even economic tensions lies behind it. In this article I will try to unravel this web for you in order to shed light on the richness of the mantilla’s history and symbolism.

During the 18th and 19th century, due to the arrival of the Bourbon dynasty and later the Napoleonic invasion, the cultural and administrative model of France exerted a big influence in Spain. This situation led to polarization between Spaniards who supported the French ways and those who regarded them as a cultural invasion. In the early 18th century, the second faction in the Spanish aristocracy started to counteract this process of “Frenchification” by copying the manner of dress, behavior and other customs of the lower classes, which were considered intrinsically Spanish.

This tendency popularized flamenco and traditional folklore, mainly associated with Andalusia (Southern Spain), and it would reach the arts and, of course, fashion. In the account of his travels through Spain in 1789, the French diplomat Jean-François Bourgoing commented on this proclivity:

In most countries the inferior classes think it an honour to ape their superiors; in Spain it is the contrary… There are persons of distinguished rank, who seek their models among the heroes of the populace, who imitate their dress, manners, and accent, and are flattered when it is said of them: He is very like a Majo. One would take her for a Maja (p. 222).

But, what does he mean by majo or maja? This term is actually relevant as it named the cultural phenomenon that embodied and appropriated the popular types in Spain from the second half of the eighteenth century to reclaim the Spanish heritage: the Majismo. If we turn again to the RAE, a majo/a refers to a “person from some popular neighborhoods of Madrid, who in the 18th and 19th centuries was characterized by their flashy costumes, their arrogant attitude and their casual way of speaking”.

The style of the majos came to epitomize the sought-after Spanishness and eventually produced a pictorial ideal of a shared national character, in which both the Enlightment and, above all, Romanticism would be interested. Tara Zanardi has created a rich study of this phenomenon, including the circulation of fashion items from lower to upper classes, in her book Framing Majismo (2016).

The archetypal maja “generally wore a bodice and skirt trimmed with lace, braids, and frills; a basquiña or saya (petticoat) over the skirt; a short jacket (jubón); a hairnet; a silk cap; a coif decorated with tassels or ribbons, or a comb with a large ribbon rosette; and a mantilla in white or black, but usually the latter (Ribeiro 2002). One of the first great aristocrats to adapt the majismo into her attire was María Teresa de Silva Álvarez de Toledo, XIII Duchess of Alba. Free-spirited and devoted to Spanish folklore, her identification with the figure of the maja served two main purposes: to emphasize the validity of her noble house as one of the oldest in Spain through her association with popular garments and, not least, to play with the social barriers to her greater freedom as a liberal woman of the 18th century.

Alba’s portrait by Francisco de Goya in 1797 wearing a mantilla would set an example for the elite. It was the first aristocratic representation of this costume unrelated to a masquerade, but converting it into part of actual female fashion. Only two years later, Goya would paint the Queen María Luisa in similar pose and garments, naturally including a mantilla.

The power of the majismo phenomenon is clear, as even the originally-French Bourbons adapted this style in order to fashion themselves as the legitimate rulers of Spain. Moreover, let’s not forget that the French Revolution was still recent, so the dissociation with French aesthetics was even more crucial in these moments of risk for the monarchy. 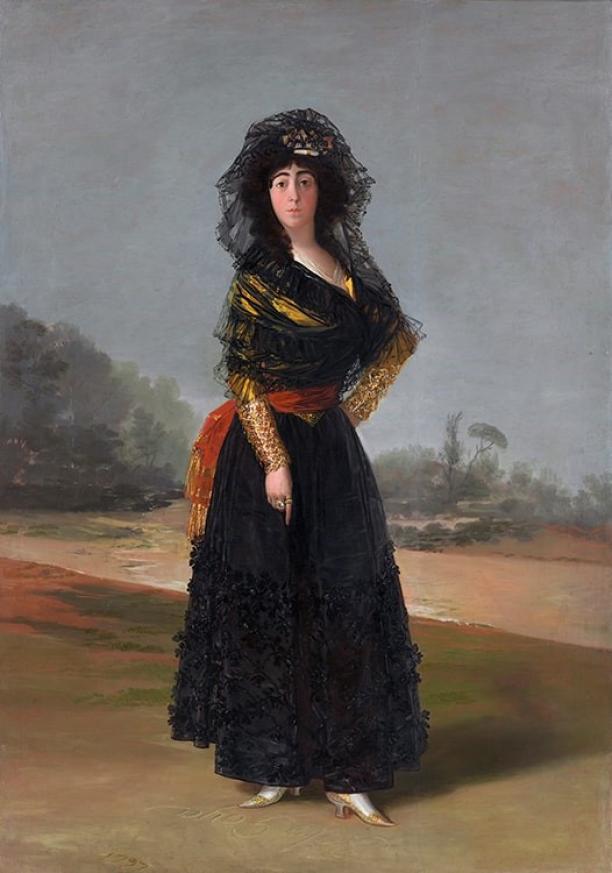 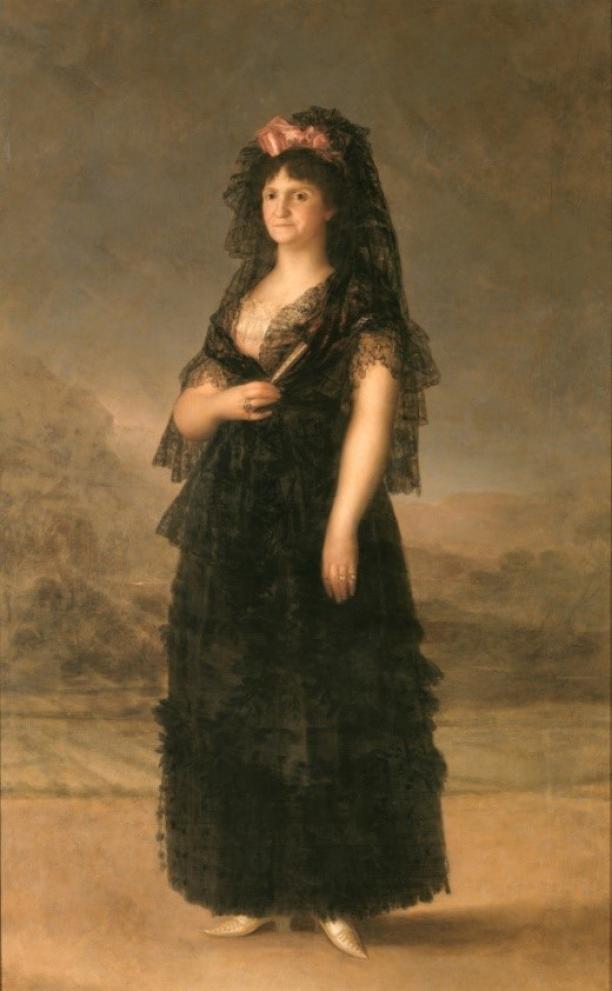 Other factors would contribute to the eventual ubiquity of this item. Mantillas benefited from the changing taste in Europe for more translucent or airy materials, like tulle or muslin. Heavier brocades gave way to lighter fabrics, often tailored close to the body (Zanardi, 2013: 146). In addition, the mantilla production represented an economic opportunity for the Spanish government.

The reformist King Charles III of Spain viewed the interest in customary clothing as a way to promote the national textile industry. In the 18th century silk lace was the most-commonly used material for mantillas. In the country, areas of Catalonia, Valencia and Ciudad Real were specialized in its production. Even though Spanish women would use both national and foreign laces, the popularity of the mantilla definitely profited these industries.

To all of this an interesting gender perspective can be added. In the 18th century embroidery and lace-making were a female task, outside the control of man-dominated guilds (what meant lower wages and less status). Therefore, lace manufacture occurred in less formalized spaces, typically family-operated workshops. Various schools were founded from 1776 onwards to encourage female participation in textile vocations, especially directed toward orphans and girls from lower classes (Tanardi 2013: 145).

That is why the mantilla craftsmanship came to showcase not only the woman’s modern Spanish femininity, but also to celebrate the women who produced it nationally.

From the 17th through the 19th centuries, Spanish women of all different backgrounds sported the mantilla for promenading, horseback riding, social visits and as a sign of respect when in mourning and attending church or religious processions, both with or without the typical big hair comb peineta to style it underneath. The link between the mantilla and these religious occasions favored its association with Catholic values of modesty or purity, which served as a source of national pride. In fact, the very polychrome sculptures of Virgins typical in Spain, which are paraded during the celebration of the Holy Week, include lace mantillas in their ornamented headwear. 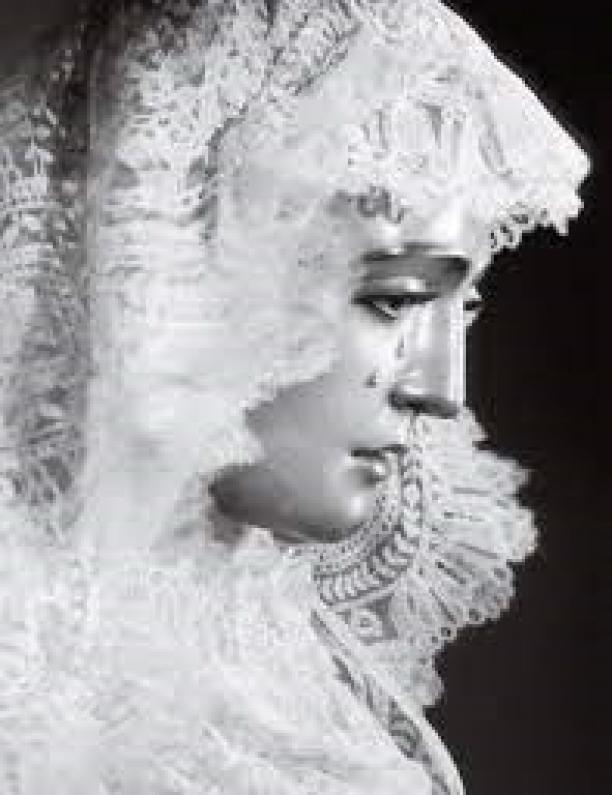 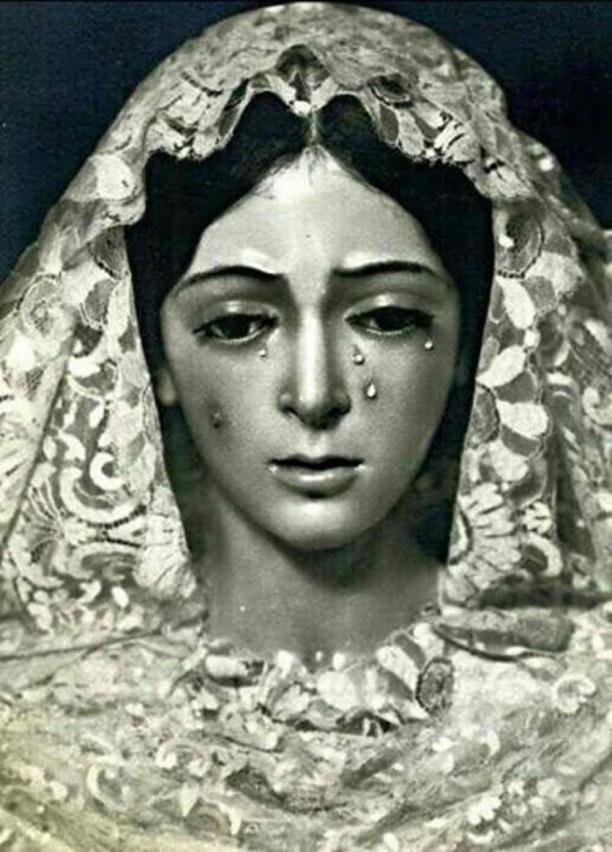 These virtuous connotations would not prevent natives and travelers alike from finding this garment to be one of the most seductive in a woman’s closet. The allure laid in the mysterious, even poetic, effect of glimpsing the wearer through the lace, simultaneously hiding and revealing the person under it. That is why the mantilla played a key role in the sexuality of the constructed image of the maja that would become popular in the collective imagination later on (Tanardi 2010: 20).

The exoticizing vision of Spain that Romanticism crafted internationally boosted the mantilla’s status as the most archetypical piece of the Spanish female garb. Samples of this romantic construct, and of its lasting influence, can be easily found in Western art and literature. One of the best known examples might be the novel Carmen by Merimée and its adaptation to opera by Bizet, but I would like also to highlight the Spanish-themed productions by Diaghilev’s Ballets Russes.

Another big boost for the mantilla was the continued use by great personalities such as Queen Isabella II of Spain or the Spanish-born Empress Eugénie of Montijo, whose import of the Spanish aesthetic to France will be the focus of my master’s thesis in 2023.

For whatever of the aforementioned reasons, the fact is that Spanish women (even some international) popularly chose to be portrayed wearing the mantilla. There are countless examples, from the great portraitists of the 19th century, such as Federico Madrazo or Franz Winterhalter, to the photography of mid-20th century.

Tanardi makes a reflection that I would like to bring back at this point: “As fashion trends shifted and Spanish women incorporated different local and pan-European styles into their wardrobe, the lace mantilla provided a fixed point to assert their identity as definitely Spanish”. If one takes a look at the images that accompany this article, the change in women’s fashion can be appreciated while the mantilla remains a common link between all the different periods.

Between traditional redoubt and global symbol

This garment has survived to the present day, especially in central and southern Spain, the original political and economical connotations having faded away. From omnipresence, the use of the mantilla has been reduced to very specific occasions, almost always with the peineta: the mother of the groom at the wedding; on Maundy Thursday (considered to be the day of the death of Jesus Christ) as a sign of respect; and in grand bullfighting sessions, in this case normally white. Of course, it is neither mandatory nor protocol, but rather an exception to the rule nowadays. 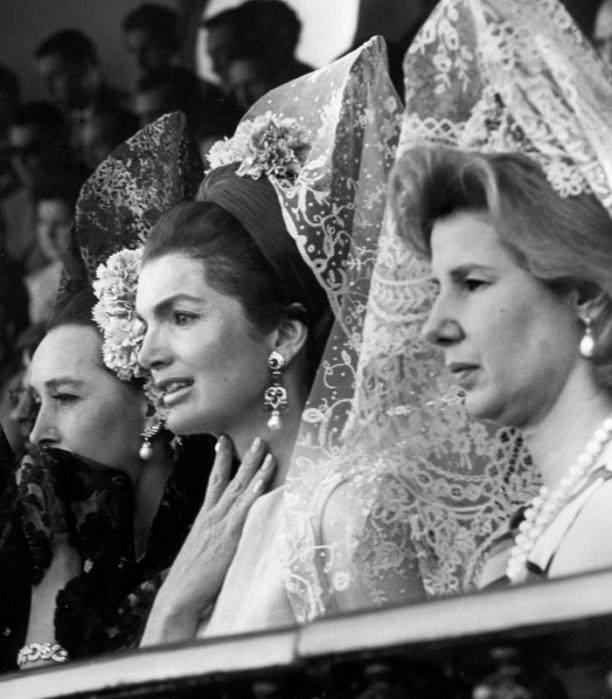 From left to right, the Countess of Romanones, Jackie Kennedy and the Duchess of Alba at a bullfighting event at the Maestranza (Seville, Spain) on April 21st 1966.

One of the occasions in which the mantilla is indeed requested as a matter of protocol is when meeting the Pope. Women are expected to wear an austere outfit, with sober lines and colors, accompanied by a mantilla or veil.  Interestingly, only Catholic sovereigns (Spain, Luxembourg, Monaco and Belgium) are allowed to use white in their clothing, the so-called Privilège du blanc. The fact that the mantilla is currently used almost exclusively in religious ceremonies, with the exception of the controversial bullfighting, has caused it to lose the symbolism of modern femininity it enjoyed in the 18th and 19th centuries and to be tinged with conservative and even far-right-wing tones. This association, together with its high price, has caused its relevance in the female closet to plummet in the Spanish society of the 21st century. 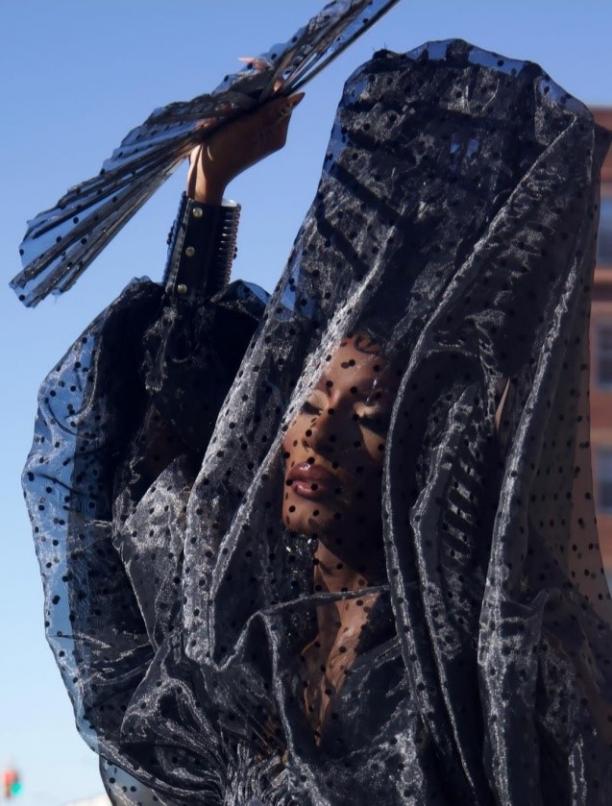 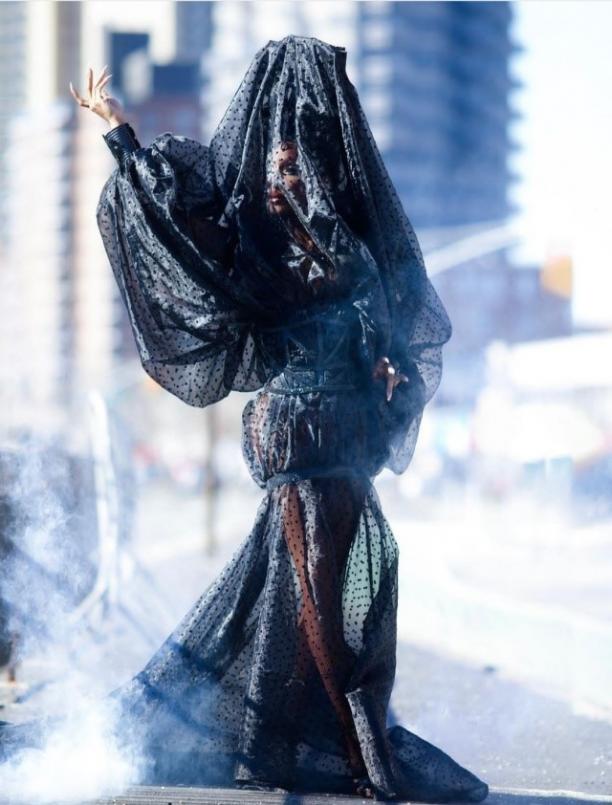 Internationally, however, the mantilla as a fundamental piece of the archetypal image of Spain is still in force. One example could be the book recently published by Bloomsbury, whose title is self-explanatory: Fashioning Spain: From Mantillas to Rosalía (2021). Another case I like to mention is more related to current pop culture. In the TV-show Rupaul Dragrace All stars, season 7, one could see one of the contestants reinterpreting the mantilla for an outfit. In episode 5, called “Draguation Speeches”, the category for the runway was “Veiled It”. Jaida Essence Hall came out wearing a translucent total-black head-to-toe dress that could resemble a contemporary version of Goya’s portraits.

As accessories she included the peineta and a fan. Two comments by the judges stand out. Carson Kressly said “It’s Spanish and it’s fly” and Michelle Visage added “I love the Spanishness of it”. The fact that the first mental link they make with this look is Spain, without the contestant having said anything specific about it, reinforces the argument of the prevalence of the mantilla (and even more in the traditional black color) as the constructed symbol of the Iberian country. The opinion of the guest judge Nikki Glaser is also interesting as she said “I love that I can’t see you and that I had to go like, ‘I wanna know more’”. This ties in perfectly with the potential for mysterious attraction that is part of this item’s original allure.

In conclusion, I would like to say that it is precisely its rich and sometimes contradictory nature that makes this garment so attractive to research. The mantilla finds itself between regional dress and fashion; between individualism and stereotyping; between nationalism and globalism; between modernity and tradition; lacing up all these aspects.