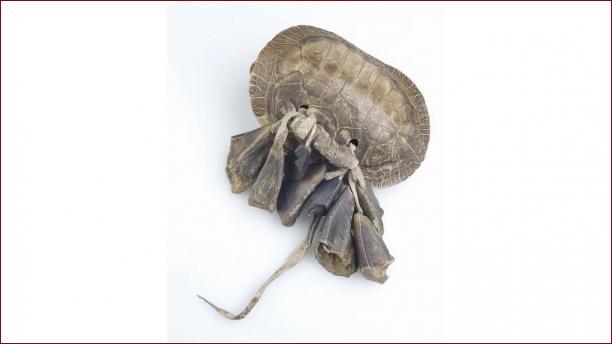 362-139 Leg rattle from San Ildefonso Pueblo; tortoise shell, deerhooves, hide; l. 13 cm., h. 9 cm.; ca. 1880. The desert tortoise lives in riparian habitats, water holes, springs, that are scattered throughout the semi-arid Southwest. The animal exemplifies life and survival in the desert, and is associated with the gods that provide life-sustaining rain. The Pueblo Indians believe that when the Rain Gods hear their leg rattles, they will send rain for their crops. The tortoise shell leg rattles with deerhoove pendants are worn just below the knee, tied with hide thongs such as this specimen, or are sometimes attached to the top of moccasins, as in the case of the San Juan clowns participating in the Raingod Ceremony (Laski 1959:142; Roediger 1961:145-146; Fane 1991:118). 362-131, 132, 133, 136, 137, 139, 199, 200, 201 Matachina and other dance artifacts The Matachina Dance is of Spanish origin and was introduced into the American Southwest by the Spaniards through Mexico. According to the people of San Juan the dance was introduced to them by the early Franciscan missionaries from Spain. There is some debate as to the original narrative underlying the dance. Those favoring a completely European origin regard the dance as a depiction of the battle between Christians and Moors who invaded the Iberian peninsula in the 8th century. Others don't dispute the Spanish origins of the music (Iberian Polka and Basque tunes), instruments (violin and guitar) and dance steps, but regard the historical episode of the Spanish conquest of Mexico and its Aztec ruler Montezuma as original impetus for the dance. However, a fusion of the two in the Meso-American melting pot of Native Indian and Hispanic cultures cannot be ruled out and Kurath and Garcia (1970:265-268) have outlined the complexity of the origins discussion. In Tewa mythology the culture hero Poseyemu is credited with instituting the Matachina Dance, and Parmentier (1979) has argued that the figure of Montezuma has been used in Pueblo ceremonial context to communicate between two religious traditions. Matachina Dances are performed in Pueblo Indian and Hispanic communities in the American Southwest, at Pascua by the Yaqui (see chapter on Mexico) and in Mexican non-Indian and Indian (Yaqui, Tarahumara, Huichol, and other) villages (Champe 1983; Rodriguez 1996). In different societies the dance and its constituent parts and roles can have more or less divergent meanings as comparative studies have shown (e.g. Kurath 1957; Robb 1961; Lea 1964; Saldaña 1966; Champe 1983). Interestingly, the Indians of Santo Domingo Pueblo believed that this dance was instituted by Montezuma so that the Indians can mock their conquerors (Dumarest 1919:186). The Matachina Dance, integrated into the calendrical cycle of Pueblo ceremonies (Ortiz 1969:104,143), is generally performed during wintertime, in San Juan usually on December 24 and 25. There, a series of eight performances are given: in front of the church, the priest's house, the homes of the principal characters, Monanca and Malinche, the homes of the Summer and Winter caciques, and on the north and south plaza (Parsons and Beals 1934:498,509-510; Parsons 1939:852-855; Kurath 1958; Kurath and Garcia 1970:38-45; Sweet 1985:42,89-90; Rodriguez 1996:97-101). (Hovens 2008-09) Beenversiering van schildpadschaal waaraan hertehoeven zitten. Bij dansen gebruikt.