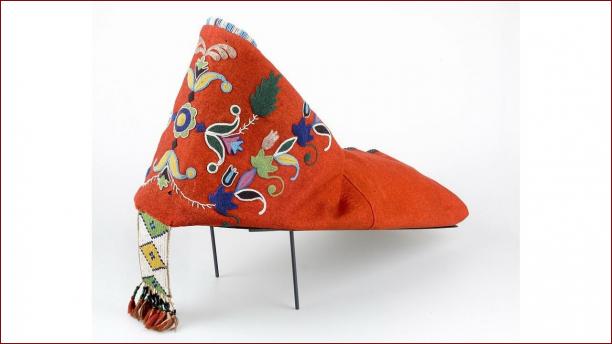 Northern Plains soft cradle; attributed to Yanktonai; ca. 1860-1870 Wool, cotton, hide, glass, horsehair, metal, l: 95.5 cm.; w: 46 cm. RMV 710-14; Herman F.C. ten Kate collection, 1882-1883 This specimen was purchased by the Dutch anthropologist Herman Frederik Carel ten Kate from a dealer in Niagara Falls in 1882. It was part of a collection of twenty ethnographic objects said by the dealer to be from the Two Bears Band of Yanktonai Sioux of Fort Rice, Dakota Territory. In the absence of playpens, cribs, high chairs and carriages, Plains infants spent much of their first year in a cradle, the only specialized equipment made for them. Soft cradles such as this one were an early and persistent Central and Northern Plains form, and were a favorite among the Sioux people (Greene 1992). Soft cradles were initially made of tanned animal hide. When wool cloth became available from European traders, Yankton and Yanktonai women frequently preferred to make their cradles, pipe bags and some clothing items from the soft, bright stroud cloth rather than from hide. Of the limited available colors, red often seemed more pleasing to the women than navy blue, green, yellow or black. This cradle is formed of two sections of red stroud cloth sewn together: a hood to protect the infant’s head and face, and a long cover which wrapped around the body and folded up over the feet, and might be secured with a tie. The red stroud is lined with blue cotton. The mother held the cradle in her arms or rested it on her lap, or it could be mounted on a lattice wood frame for ease in carrying on her back. While not every Plains child had a decorated cradle some had more than one, gifts from loving grandmothers, aunts, and family friends, made to honor the new life. In the absence of a cradle, a child was secured tightly in soft wrappings. When old enough, he was carried on his mother’s back, facing forward and covered with a blanket which the mother threw over her shoulders, pulled tight under the child’s buttocks, and held closed in front. Many nineteenth-century photographs picture a supported child peering over the shoulder of its mother with great curiosity. The close bodily contact between the two, the rhythmic movement of the walk, and the child’s ability to see at eye level all that the mother saw, led to feelings of contentment and security. The hoods of soft cradles were often decorated with elaborate designs in quill or beadwork (see also RMV 3158-17). European floral designs were introduced to the northeastern Plains by eastern tribes moving west in the eighteenth and nineteenth centuries due to opportunities in the fur trade and pressure from encroaching white settlement. The seed bead design on this hood, with its bi-lateral organization of small, stylized, stacked plant forms, opposed curves, narrow pointed leaves, fine, curving stems, a multitude and asymmetry of colors and shapes are typical of what Burton Thayer, Ted Brasser and Richard Conn have called Red River Métis floral work. This group, the result of unions between mostly Cree and Ojibwa women and primarily French, but also Scottish and other European fur traders, was assimilated into many Northern Plains groups after Métis communities dispersed in the mid-nineteenth century. Métis women were skilled in floral quill, bead and silk thread embroidery. They were called the “flower beadwork people” by both Cree and Sioux (Harrison 1985:84), and their designs became a part of the Northern Plains bead repertoire through trade and intermarriage. The multiplicity of designs and styles that resulted from Métis infusion into various Northern Plains communities makes it difficult to ascribe their influence with certainty. A hide tab beaded in a typically Sioux geometric design hangs from the back of the cradle hood, ending in horsehair tassels and tin jinglers. The tab is similar to those on fully beaded Sioux and Cheyenne cradle hoods (see RMV 3158-17) and may have had protective significance. Barbara Hail Haffenreffer Museum of Anthropology, Bristol, RI Candace Greene, Soft Cradles of the Central Plains; in: Plains Anthropologist 37:96-113; 1992. Julia D. Harrison, Métis: People Between Two Worlds; Douglas & McIntyre; Vancouver and Toronto, 1985. Engelse tekst
Yanktonai soft cradle; cotton, hide, glass, horsehair, metal; l. 95.5 cm., w. 46 cm.; ca. 1860-1870.
Sioux women made cradles for their sisters' and brothers' infants, and often more than one was presented to the parents of the new baby as an expression of love, respect, and solidarity (Hassrick 1964:109,312). Such soft cradle covers, made from either hide or cloth, were called waupusta among the Sioux. Mothers carried their babies in their arms wrapped in such triangular hide or cloth hoods and covers. The upper parts or hoods were elaborately decorated with bead- and quillwork, and was drawn around the infant's face, while the soft wrapping cushioned the baby's body. When carrying a baby on their back, the hood was fastened on a frame of wooden slats (Dorsey 1896:275-276; Howard 1966:15; Hail 1980:144,148; R. Lessard 1990; Greene 1992; Hovens and Krosenbrink 1994; cf. Feder 1978 for Pawnee cradles).
This type of soft cradle could be found anywhere on the Plains. The floral beadwork patterns on the Leiden specimen are an excellent example of this style that developed among the Yanktonais and Yanktons due to their assimilating many Red River Métis by intermarriage after the 1840s, the Sioux even referring to the Métis as "the flower beadwork people" (Thompson 1977:169; Brasser 1985:225-226; Brasser 1987:129-130; Walton et.al. 1985: 172-179; R. Lessard 1990:44,46 Penney 1992:172-177). The red stroud is lined with blue cotton. Horsetail tassels in tin cones decorate the end of the beaded tab, creating a tingling sound while the baby is transported.
(Hovens 2008-09)