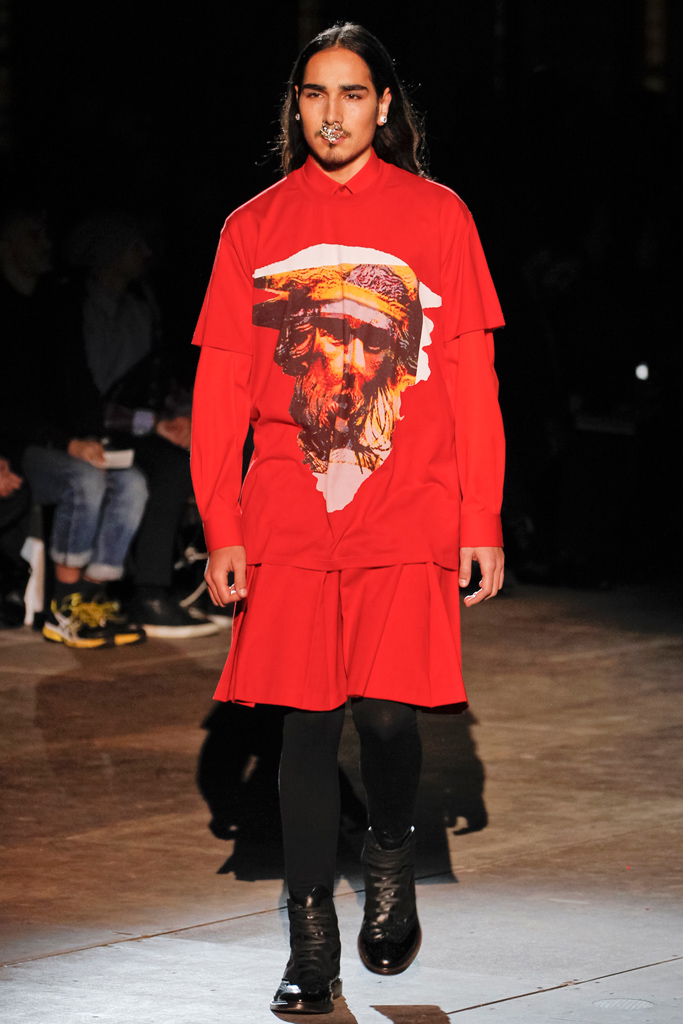 There has been a double standard throughout the history of everyday fashion. Whereas women have gradually exchanged their skirts for trousers from the early nineteen-hundreds onwards, men haven’t taken up the opportunity (or have been able) to incorporate the skirt in their everyday apparel.

Despite the valliant efforts made by fashion visionaries such as Jean Paul Gaultier, Vivienne Westwood, Dries van Noten and Walter van Beirendonck, the phenomenon of the man-skirt hasn’t found a raison d’être outside of the high-fashion discourse. Although effortlessly adopted as a symbol of anarchy by counter-cultural groups like punks and new romantics, one might still raise questions as to why the kilt, sarong or man-skirt has evidently failed to become an indespensible item in everyday (Western) men’s fashion. 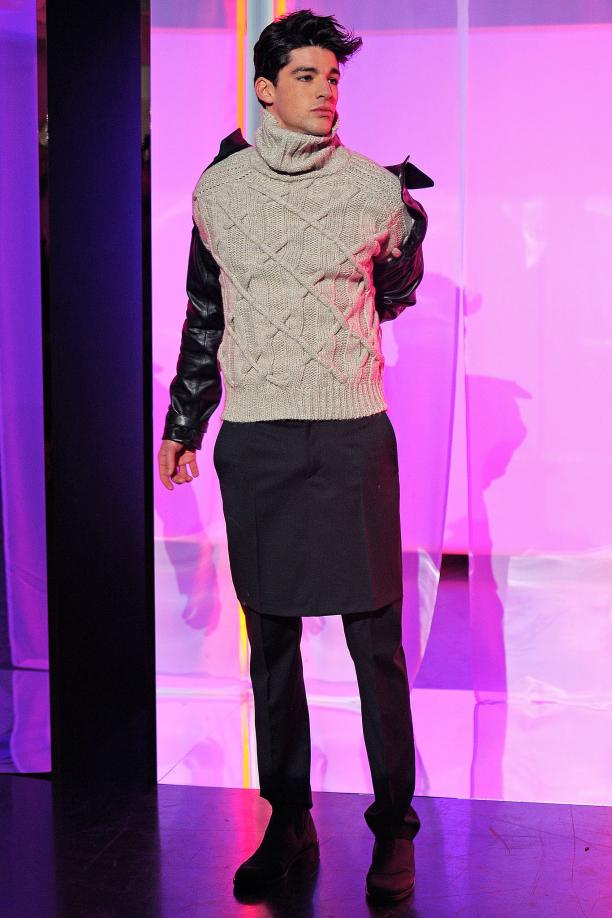 When The Fashion World of Jean Paul Gaultier was on exhibit at de Kunsthal Rotterdam in early 2013, Gaultier’s signature coned bra was probably his most sought-after piece. However, an equal amount of attention could have been payed to his revolutionary, playfully gender-bending man-skirts dating back to 1985. Ever since Gaultier’s masculine interpretation of the skirt, established and up-and-coming fashion designers have actively taken up this concept as a starting point to question our wardrobe’s underlying gender binary. 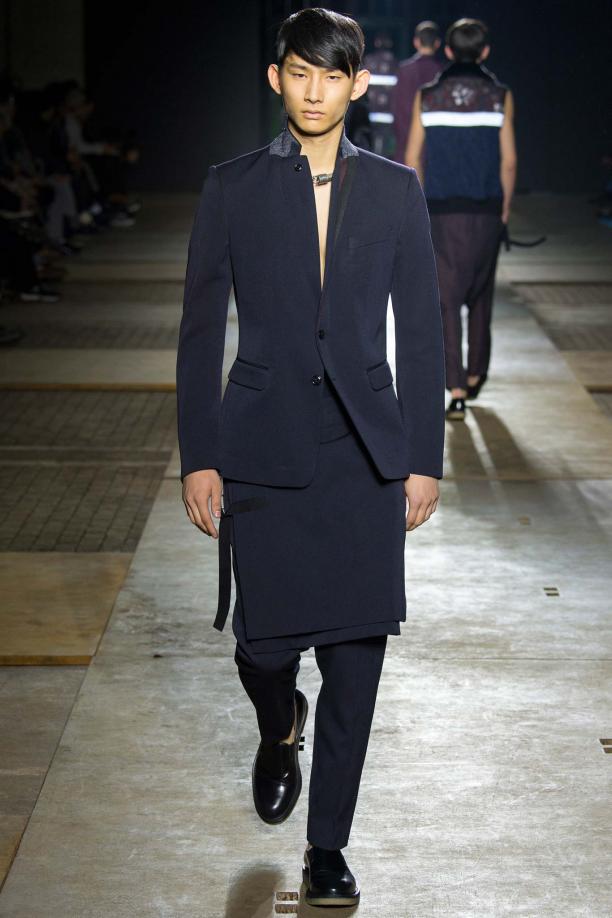 To gain a deeper understanding as to why the man-skirt is an absolute faux-pas, one has to reckon that this stance is a remnant of a shift in cultural values that occured with the advent of the Victorian Era. It is namely in this particular time period that gender roles would be defined more sharply. As man and woman were confined to seperate spheres, only joining each other for breakfast and dinner, their respective garment adapted towards the spaces they inhabited.

A Victorian woman’s domestic workload had become greatly reduced due to the presence of servants, this enabled them to dress in a less pragmatic fashion such as the crinoline. By contrast, as men began to occupy the public sphere exclusively, thereby making them visible for other men to see, their dress adapted in terms of general look and practicality. Moreover, as the Victorians began to develop a more sober taste in dress, it became highly disregarded for men to adorn themselves in bright colours and luxurious fabrics. Expanding on this principle of sobriety, the proper decorum for men had become suits, plain shirts and ties by the middle of the twentieth century. 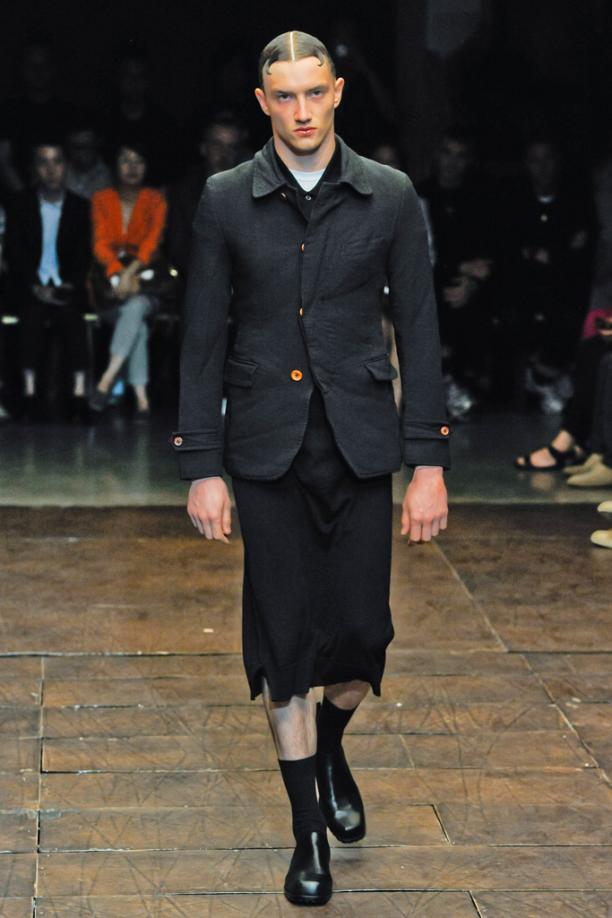 When taking the above into consideration, it isn’t far-fetched to state that the skirt, or anything akin to a skirt, had irrevocably become a hallmark of feminity. Since the Victorian era we have come a long way in terms of women’s rights and gender equality, it is striking however that we still largely cling to Victorian standards in terms of everyday fashion. Our generation of designers and consumers is bestowed with the noble task of proving that the colour, form and materiality of our clothing is not necessarily a signifier of our gender identity. A viable point of departure would be to judge the man-skirt on the basis of its aesthetic, material and functional merits.