Jane before Birkin: ‘Handbags’ through history 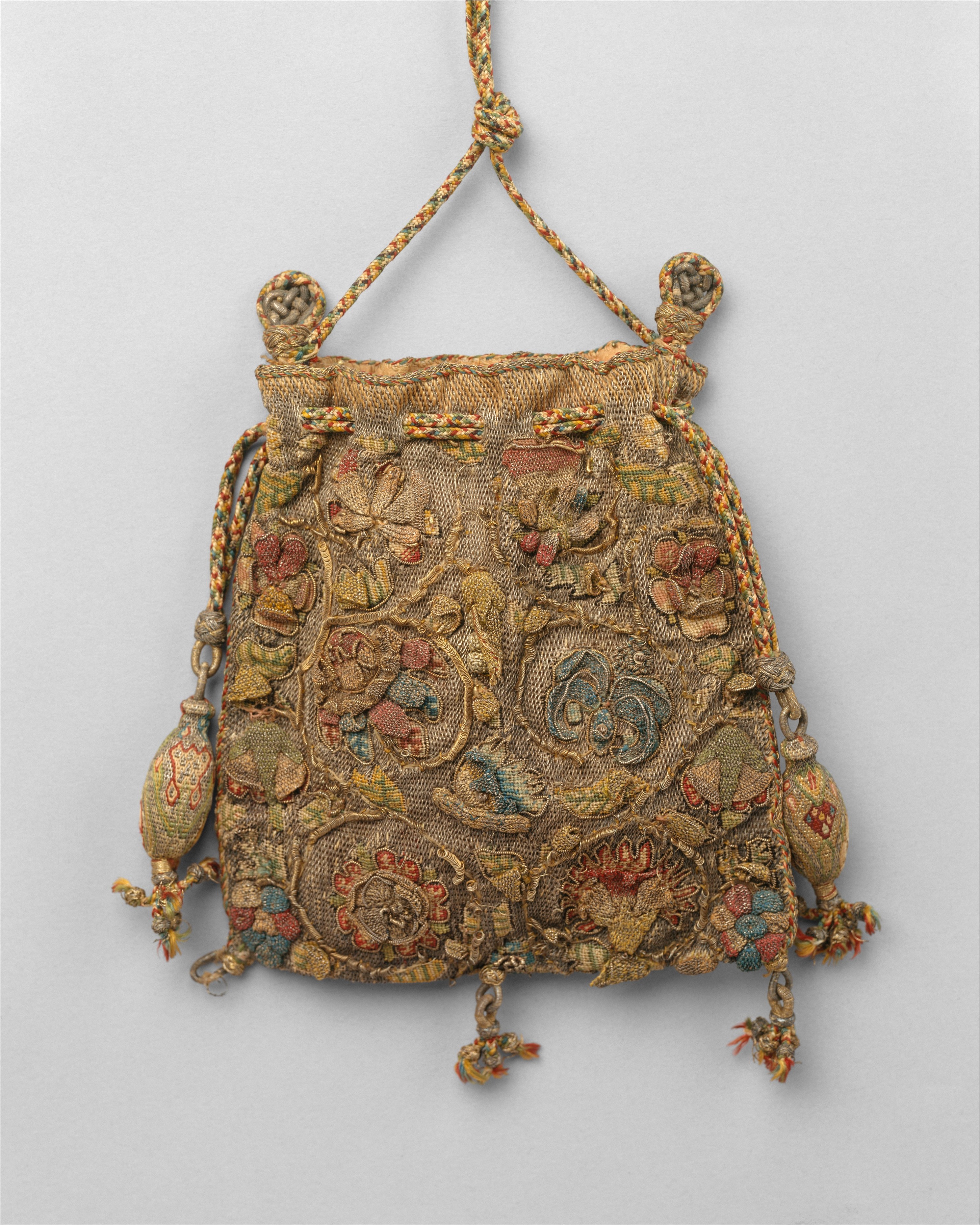 The modern ‘handbag’ is today considered to be solely in the female domain, but this has hardly been the case historically. After all, people have always needed to carry the same things.

Whilst today’s Rizlas may differ in appearance from an 18th century snuffbox, the principle remains the same. From pocket change to pocket handkerchiefs, we have always needed to keep personal objects to hand. The gendering of the handbag is a comparatively recent development that stems from a largely arbitrary change in fashions. After all, what is a handbag but a means to carry our belongings?

The need to keep and wear personal objects on the body is a continuous tradition reaching back as far as the Bronze Age. Some of the earliest bags on record belong to an ice mummy discovered in the Ötztal Alps. Frozen in a glacier for nearly four thousand years, pouches were found on the body of ‘Ötzi’, including a birch-bark container used for transporting glowing embers.

Early purses have also been found on bog mummies and graves- in one excavation of an Anglo-Saxon cemetery in England, sixteen graves were found with purses.[1] The contents of Anglo-Saxon purses vary. Some women's graves have been found with ivory pouch rings (all that remains once the leather pouch itself rots) containing items to suggest such bags were amulet bags. 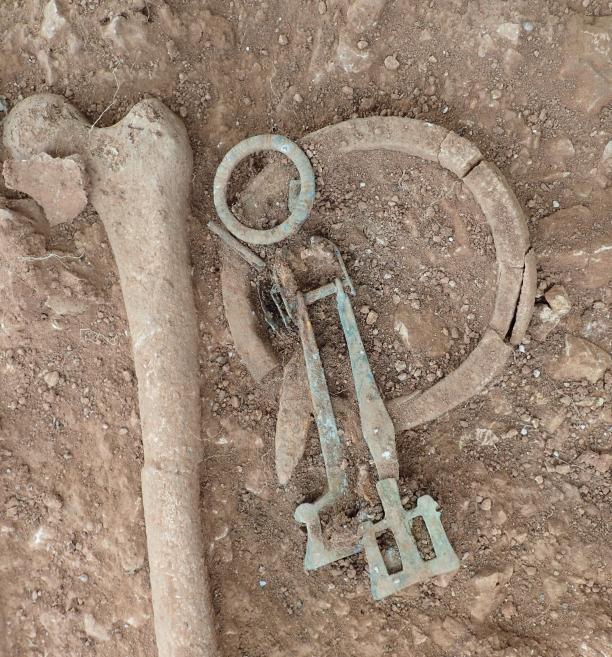 Elephant ivory rings used to open fabric bags, found in one of the (female) Anglo-Saxon graves in the Lincolnshire Wolds, late fifth to mid sixth century AD, University of Sheffield.

Female graves also often contain the remains of a distaff and spindle, suggesting that the tools for spinning were a constant companion, either tucked into a girdle or carried in a work bag at the hip. Other practical objects found worn at the belts of both men and women include knives, tweezers, shears, keys, and amulets.

The use of bags and purses saw its first heyday in the Middle Ages. The English words for ‘bag’ and ‘purse’ are both first used in written texts circa 1225. Similarly, the Dutch ‘tas’ appears in the 1290s, along with its variants including the German ‘tasche’ and Old Norse ‘taska’. This may have something to do with the purse becoming a fashion item throughout Europe during this period for both men and women.

Clothes were incredibly important to much of European medieval society, with many fabrics and styles protected by sumptuary laws. Purses became part of this culture of display. This is reflected in the fiction of the period: in Chaucer’s Canterbury Tales, a group of English guildsmen wear expensive silver girdles and pouches, implying they are dressing above their social class. This is in addition to objects carried at the belt: knives and daggers were “worn prominently as costume fittings because men’s tight- fitting tunics were shown off by low-slung belts”.[2] Wood-cut depicting three peasants, Albrecht Dürer. The man on the right is wearing his knife in his belt and carries a lovely basket.

Girdle purses were used by both men and women to carry personal items such as money, keys, combs, ear-scoops, and dice, and surviving examples are often highly-decorated. With a society increasingly on the move, whether for trade, pilgrimage or Crusade, there are also many surviving examples of bags made for travel, from relic bags to merchant pouches. These can be found all over Europe during this time, as pilgrims, merchants, and crusaders alike began travelling further on a more regular basis.

Purses for Elizabeth I

By the time of the Renaissance, there was a certain shift in fashion. Whilst purses were clearly still used, a shift seems to have taken place, where bags were no longer worn prominently as a sign of status. This can be seen in Holbein’s portraits, where the only subjects he portrays with bags are merchants, who sit surrounded by their wares. 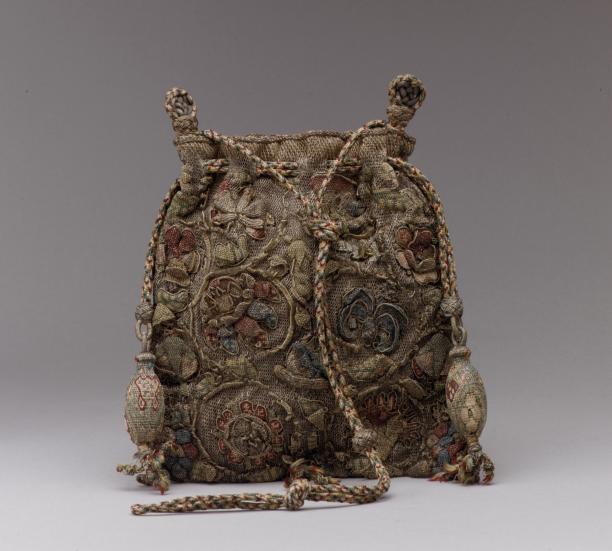 Perhaps the only exception to this is the pomander, or sweet bag, which can be seen at the waist of many noble women in the portraiture of the time. In an era where diseases were thought to be spread by bad smells, these small bags filled with herbs and flowers were an important part of daily life.

There is no distinguishing feature to a sweet bag beyond its contents; similarly-sized embroidered pouches were also used to contain gifts, and as tokens during courtship, when they could contain sentimental objects such as rings. New Year’s Day had been a time to give gifts in England since the 13th century, but during the Elizabethan era, this reached new heights. A popular gift was money, presented in extravagant purses: in the list for New Year’s gifts for 1562 alone, Elizabeth I was given nearly one hundred purses.

This is not to say that no other bags were worn or used. Pickpockets and cutpurses feature highly in court proceedings of the times, pointing to the continued wearing of bags at the belt. The absence of bags in portraiture is made up by their abundance in literature. What is particularly noticeable is the emergence of the pocket: soldiers in Henry VI fill theirs with stones, Gratiano in The Merchant of Venice wishes his pocket kept a prayer-book, and Falstaff’s pockets in Henry IV are full of receipts for expensive food. 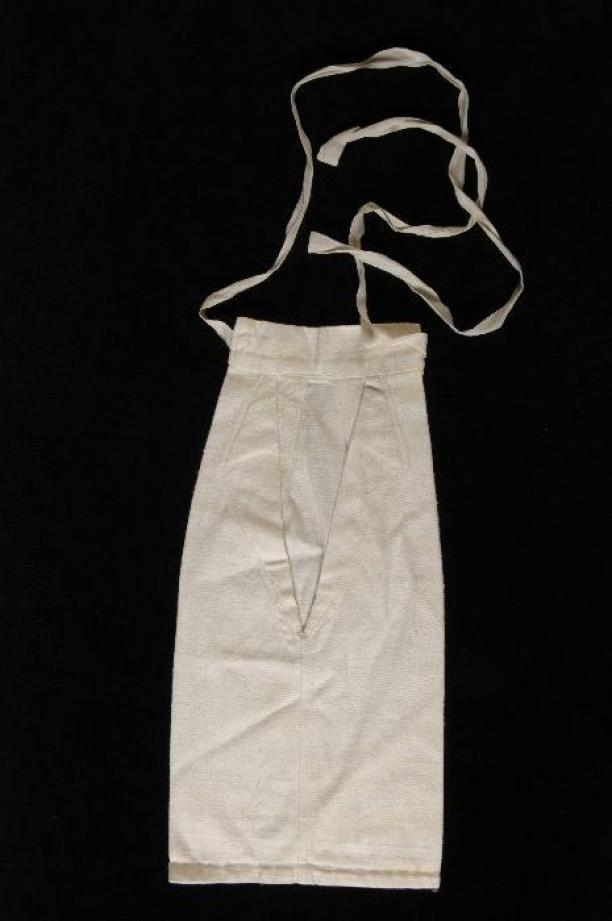 By the 18th century, men’s clothing had gained lined pockets that would still be familiar today. Women also were great users of pockets of a different style. Separate to their garments, women’s pockets tied at the waist under the skirt, and were of quite some size. There is even one account of a female thief using her pockets to conceal a live duck. Outwith of stolen poultry, The Female Spectator advised in 1745  that “the snuffbox and smelling-bottle are pretty trinkets in a lady’s pocket”.

Due to the continued use of pockets for personal items, bags were largely used for specific functions, many of which were gendered. Tristram Shandy’s Dr Slop owned an obstetrician's bag containing “thy tire-téte, thy new-invented forceps, -thy crotchet, -thy squirt, and all thy instruments of salvation and deliverance”.[3] A pattern of professional bags becoming gendered emerged, a trend that continues up to the present-day briefcase. 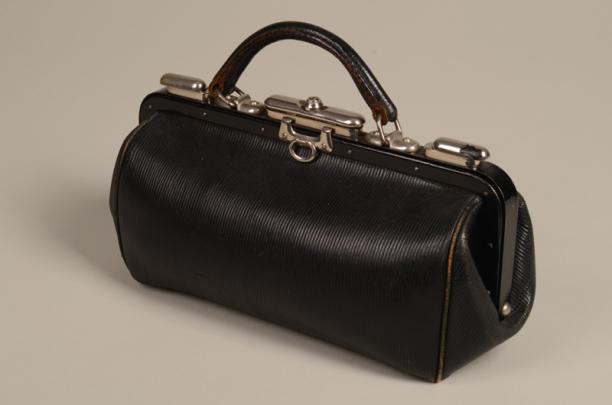 However, not all bags were limited in such a manner. Aristocrats of both genders engaged in gambling, which required its own set of accessories. Lady Mary Coke, a diarist of the period and a keen gambler, frequently mentions gaming purses, including one that she said “had a good effect; I won five & forty guineas”. Such purses are distinguishable by their flat base that ensured they could stand upright on a gaming table. They were sometimes embroidered with the owner’s family crest as a statement of prestige.

Upper-class women can also be seen in portraits of the mid- to late eighteenth century with knotting bags. ‘Knotting’- the production of a thread with a raised texture that could be added to embroidery- was a fashionable pastime for aristocratic women. These knotting bags are often beautifully embroidered themselves. What is notable, however, is that women also repurposed these bags as required, as described by Lady Coke. She described meeting a woman who “had a knotting bag hanging to her arm...‘tho’indeed’, said She, ‘I never knott, but the bag is convenient for one’s gloves and fan’”.[4]

The age of the handbag

This brief meeting, as caught by Coke, predicts the beginning of the handbag. Whilst a tied pocket may have fitted admirably well underneath a wide skirt stiffened with multiple petticoats or farthingale from the previous century, a dress in the ‘new’ Empire fashion of the 19th century - with a high waist and in semi-sheer cotton or muslin - does not conceal a tied pocket in the slightest. To say that Empire fashion instigated the rise of the modern handbag is an over-simplification, but the two fashion phenomena do go hand in hand in both practical terms and timing.

By 1809, the use of the tied pocket had passed so firmly out of the fashionable eye that when a character in Celia, a novel written the same year, asks “What is fashion?”, the answer comes promptly back: “Why, fashion is not to wear pockets”.[5] Women had gone from being able to carry on their person anything up to a brace of ducks to being expected to carry everything in their hands. It is therefore hardly surprising that an early alternative name to the reticule was an ‘indispensable’.

With one swift shift in fashion, women had to rely on very visible assistance to keep their essentials quite literally to hand. The sudden introduction of a handbag into a woman’s everyday requirements cannot have been easy. The modern handbag is in many ways an illustration of the limitations placed on women.

Even today, whilst modern men’s clothing is expected to be fitted with pockets large enough to fit one’s wallet and phone, women’s clothing is still made with a handbag in mind. To conclude with Nora Ephron, “when one of your hands is stuck carrying your purse, it means it’s not free for all sorts of exciting things you could be using it for, like shoving your way through crowds, throwing your arms around loved ones, climbing the greasy pole to success, and waving madly for taxis”.[6]