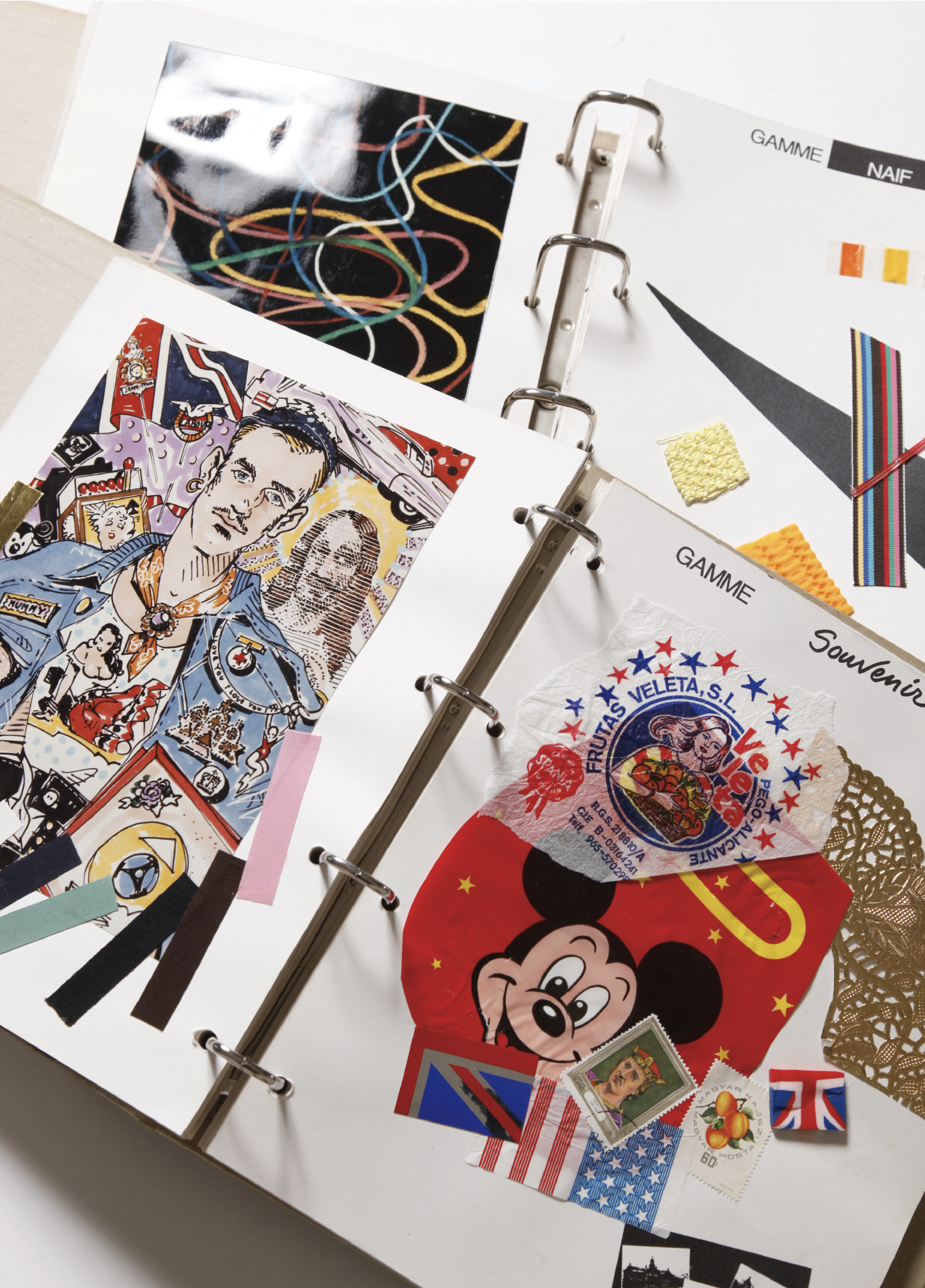 Once upon a time, in our classroom, we were playfully acting out the Pietå, I held his skinny body in my arms, a beard framing his emaciated face, a big white shirt like a biblical dress, his long hair hanging down to the floor littered with bits of yarn and discarded pattern paper. Then the door opened and in came this amazing appearance, a round faced midnight cowboy, dressed in a two-tone, apple green and orange costume with flashy golden cuffs and collar points.

All the fashion students were mesmerized and stared at this jumping jack flash daring devil. That was the first, crucial meeting of Arnold and Clemens, diametrical opposites, that attract each other still, after decades of living, loving and working together, all those years of shared creating and forecasting. At that time Van Geuns dressed like a deposed, destitute royal and declaimed classic German texts to himself in front of a gilded mirror, while Rameckers went out to discover Disco dancing and dress. The rest is history. 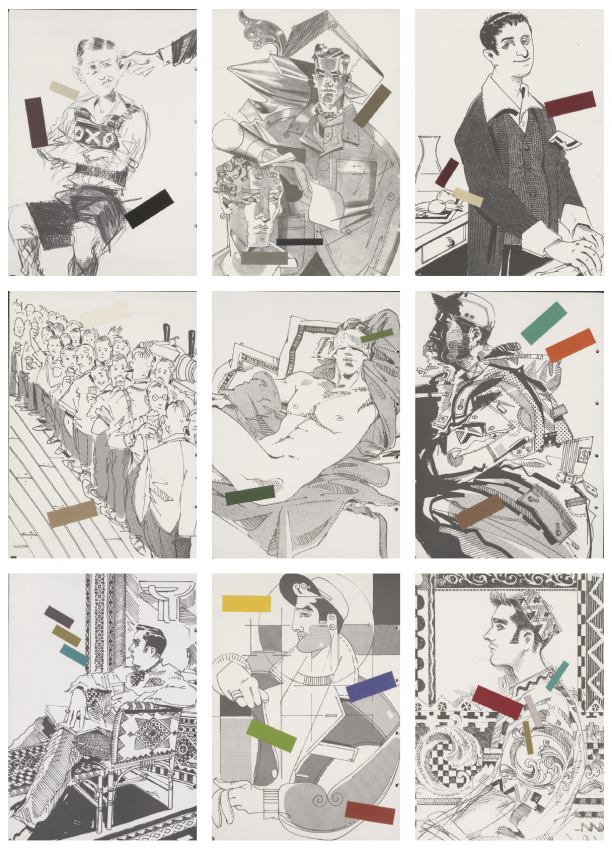 Where the one is studious, serious and harmonious, the other is whimsical, instinctive and emotional; they have a perfect balance, like the two parts of one brain. A brain that speaks with one voice, one voice that manages to predict the coming fashions in various trend- and design projects: be it books or portfolios, scarves or shower curtains, fragrances or food, mood boards or formal gentlemen’s attire.

Clemens feeds the fantasy of Arnold’s drawings, determines the theme of their exhibitions. Arnold comments on and gives a context to the aesthetic intuition of Clemens, theirs is a unique partnership based on admiration of each other’s talents. When Arnold cooks, Clemens designs the table-scape, when Clemens sews the couture curtains, Arnold paints the walls with a narrative of suffering soldiers at war. After a visit to China, an Asian room appears, when they travel to India, the house takes on Maharajah splendor. If Holland still has a hold on them, France has shaped their perception and Ibiza is the place for leisure and inspiration for creative menswear.

Together they have devised trends for major institutions such as Promostyl, Nelly Rodi’s CIM and their own collective Trend Union, founded with a group of colleagues and friends 25 years ago. They have designed skiwear, beachwear, menswear, sportswear, sleepwear, tableware and more, every season a new vision. Their work is different from that of competitors because, not only do they imagine the next wave to come, but they actually script it, design it, illustrate it and give it context. That is why their trends transcend the notion of just forecasting, they become mature design proposals as well as products. They have imagined and designed fabric collections, going to the very root of changes in fashion. They dressed their female friends (including me) in oversized blanket dresses, long before others turned blanket woolens into garments. Keen on details, their stylebooks are bibles that years later can still be consulted, full as they are of great ideas.

Clemens feels the change, Arnold renders the change, they just seem to feel fashion coming from within and therefore experience and dress the part. Every year, every season even, they seem to physically change, different hairstyle, shorter, longer beards or moustache, with or without sideburns, glasses or hats. They seem slimmer, taller, rounder, older, younger, their outfits go from shorts to three piece suits, from bomber jackets to seersucker blazers, from black tie to white jeans, from corduroys to tweeds, always dressed, before anybody else, in a new style. Fashion runs through their veins. One day they may look like an imposing Oscar Wilde, the next like a flirtatious Scott Fitzgerald or be as serious as Gilbert and George in classic attire. In the summer playful and colorful like David Hockney, in winter solid and somber like Karl Marx. Male archetypes are acted out, instinctive witnesses to changes in the air.

Their first Art and Design exhibition in New York was significant. An hour before the opening George W. Bush Sr. declared war on Iraq. The name of their exhibition was War and Peace and showed military camp beds and blankets inspired by Napoleonic battles, decorated with red crosses and cannonballs. The audience was amazed. The day their exhibition ended was also the last day of war. Their intuition for social and political fluctuation is immediate and astounding. Because they work together as one, their instinct is twofold and adds up to an eerie sense of time and timing. They use their historical insight and flair for innovation, to somehow express, with stunning precision, the new mode of the moment.

When Arnold had an exhibition in my Parisian salon in the middle of the roaring 80’s they imagined and made out of cardboard a new and rich universe where jewelry, gems, vases, furniture and fireguards were models for the real objects they would later in life design, produce and collect. They have always managed to make their lives rich and hedonistic, while flirting with bankruptcy (as a result the bailiff became a friend). I remember the early days in Paris, when they would prepare a splendid dinner from canned food (now becoming a fashion), served clochard’s house wine and laid the table with a self-designed tablecloth. Among the best meals of my life, as I remember it, poor as church mice, happy as larks.

They once visited Scotland’s great castles in that magnificent countryside. Their car was packed with camping gear and hiking clothes, black tie outfits and handmade shoes as well. Roughing it during the day and living it up at night with epicurean dinners in grand hotels. Custom officers were puzzled and highly suspicious.

Another field in which their innate insight in the zeitgeist is manifest, is the way in which they have branded themselves. Early on they decided on the unusual name RAVAGE (Rameckers & Van Geuns). In those days people didn’t brand themselves and certainly didn’t pick negative connotations to create an identity. Clemens Rameckers decided to brand everything they did and produced, Arnold van Geuns’ artwork gave it a very bold signature. With a strong black and white idiom they designed scarves and dishes, shirts and tables, wallpapers and much more. The image of the two of them, carefully positioned to be symmetrical, almost identical, inspired talented interns like Viktor & Rolf and Studio Job to do the same.

This talent for branding served them in their separate careers as well, Rameckers using the idea of corporate logos on scarves, ties, suspenders and so on in his designs for the Uniforms, that made his name in Holland and Van Geuns, branding his signature on Instagram, with installments of three drawings a day on a given cultural subject, has at present an important following.

Multi-talented, gifted, with broad interests, these men have designed their own existence as a collection, a collection of signature paintings and cartoon-like drawings, of polished silverware and sparkling chandeliers, of piles of books and eclectic music, of polished shoes and worn sneakers, of faithful friends and talented graduates. In moving from Paris to Normandy, they embody the latest rural lifestyle, re-thinking the countryside as a fairytale with castle and chalet, chapel and dovecote, goat and dog. So for them, country and city blend into the new high and low, male and female, rich and poor. Men are into lust and lace, women pose as nuns and nurses, men play at being workers and wannabe hipsters, while women act the amazons. With their talent, archetypes are reshuffled and redesigned to reflect our current chaotic culture. To be (certainly) continued.